Understand the Properties of Group 0 Elements

In this worksheet, students will learn about the properties of Group 0 elements (also called the noble gases). They will also look at the difference between metals and non-metals.

Group 0, or the noble gases

The noble gases are found on the far right-hand side of the periodic table. This group is called Group 0.

It's neat that they are in Group 0 because the word 'nothing' is a good description of what these elements do! The noble gases - helium, neon, argon, krypton, xenon and radon - are all very unreactive. As a result, they are very hard for chemists to detect.

The main way that noble gases are used is to make an inert atmosphere. 'Inert' means that it does not undergo any chemical reaction. For example, light bulbs are filled with argon. The reason that light bulbs work is because of a very thin metal wire. If light bulbs contained oxygen, the wire would burn away and the bulb would stop working.

The reason that noble gases are unreactive is that they all have a stable outermost electron shell. Here's the electron structure of argon: 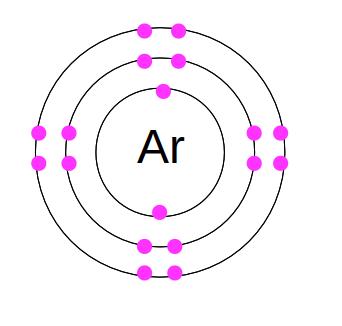 Neon is 2.8. Argon is 2.8.8. All the noble gas elements have 8 electrons in their outermost shell, so they do not need to gain or lose electrons. Helium is the only exception to this - it has only 2 electrons in total, which completes the first (and in helium's case, the only) shell.  As a result of having complete shells, the noble gases do not make molecules -  we find them as single atoms instead. They also (with very few exceptions) do not undergo chemical reactions.

As you go down Group 0, the gases get denser. That makes sense because the individual atoms have more protons, neutrons and electrons, and so more mass.

Also, as you go down Group 0, the boiling point increases, but is always very low. It makes sense that Group 0 elements have very low boiling points because the forces between the atoms are very weak, so it doesn't take much energy to break them apart. Elements that are lower in the periodic table have heavier atoms, so it needs a bit more energy to make the atoms move freely. 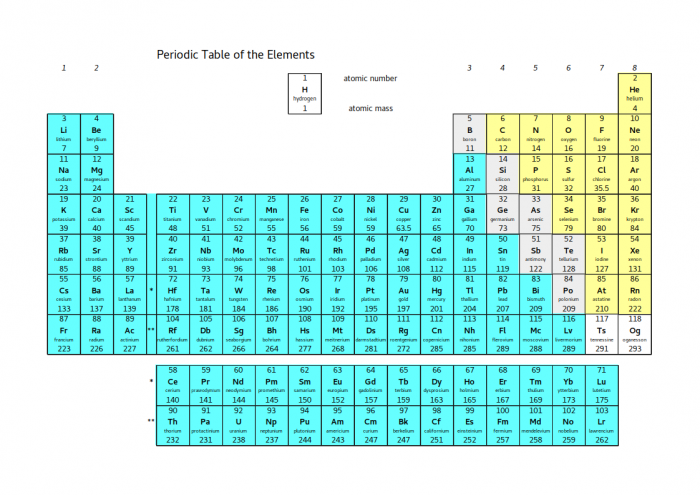 The elements shaded blue all have the properties of metals - they are shiny, they conduct heat and electricity and they are ductile (meaning that they can be drawn out to make thin wires). In terms of electrons, they all become stable by losing electrons.

The elements shaded yellow all have the properties of non-metals - their solids are dull, brittle and poor conductors, and many of them are liquids or gases at room temperature. Except for the noble gases, they all become stable by gaining electrons. The noble gases don't need to do anything to become stable, but their properties are more like non-metals than metals.

In between the two coloured blocks, there is a diagonal line shaded grey. These elements are called metalloids. Depending on the exact situation, they can either gain or lose electrons. This means that they can either behave like metals or non-metals. This property means that metalloids are very useful - electronic circuits are made of silicon because it can easily be switched between metal-like and non-metal-like states.

It's helpful to sketch the outline of the periodic table so that you know roughly what goes where.

Now it's time to put this to the test in some questions.