Understand the Properties of Group 1 Elements

In this worksheet, students will learn and apply the properties and patterns of the alkali metals, or Group 1 elements.

The Group 1 elements are also called the alkali metals. They sit in the left hand column of the periodic table. Reading from top to bottom, they are called lithium, sodium, potassium, rubidium, caesium and francium.

Like most metals, they are shiny and grey. They turn dull grey within a few seconds when they are exposed to air because they react very quickly with oxygen. That shows they are very reactive, but otherwise this is normal behaviour for metals. The reactions follow this pattern:

So what’s strange about them? Firstly, some of them have a very low density - lithium, sodium and potassium all float in water, so they must be less dense than water. Secondly, they are very soft - you can cut them with a knife or scalpel, as if they were a piece of cheese. As you go down Group 1, the metals become even softer.

The hydroxide solutions made in this reaction turn the water alkaline. That’s why these metals are called alkali metals.

As you go down Group 1, this reaction becomes more energetic - lithium fizzes, sodium fizzes a lot and potassium burns with a characteristic lilac (purple) flame.

The reason that the alkali metals behave in this way is linked to the arrangement of electrons in shells. Let’s look at sodium as an example. Sodium is atomic number 11, so a sodium atom has 11 electrons. That’s 2 in the first shell, 8 in the second shell, and one in the third shell. We can write that as 2.8.1, or draw a picture like this: 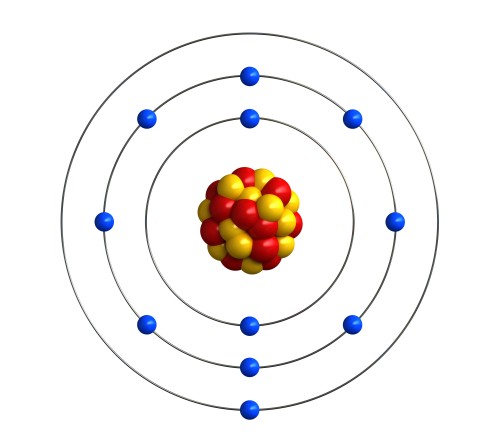 When alkali metals form compounds with non-metal ions, they form ionic compounds. This means that the positive and negative charges exchanged have to balance, which allows us to work out the formula of the compound formed.

Ions of alkali metals always have a charge of +1 (because they lose one electron). Different anions have different charges. Let's look at some examples:

Oxygen is in Group 6, so its atom has six electrons in its outermost shell. Oxide ions need to have gained two extra electrons, so their charge is -2. This means that you need two alkali metal atoms (each giving up one electron) for each oxygen atom (taking two electrons). So the formula for all alkali metal oxides is M2O, where M is the metal. The same works for sulfur, so potassium sulfide is K2S.

For elements in Group 7 (fluorine, chlorine and so on - also called the halogen group), each atom has seven electrons in its outermost shell, so it needs to gain one more electron - the charge on the ion is -1. This means that you need equal numbers of alkali metal atoms and halogen atoms. Sodium chloride is NaCl, caesium iodide is CsI, and so on. The same thing works for hydroxides because the charge on OH is -1. So lithium hydroxide is LiOH.

To get the highest grades at GCSE chemistry, you need to be able to apply chemical principles to unfamiliar situations. Knowing the main examples is a good place to start, but keep thinking about the underlying rules as you try out the following questions.