In this worksheet, students will practise calculating speed and what affects it.

Speed is a way of saying how far we travel in a certain period of time. This could be during a second (s), a minute (min), an hour (h) and even longer.

To work out the speed we have to know the distance and the time. We use this formula:

You have to be very careful when you calculate the speed, because there could be various units used. If the distance is in metres (m) and the time in seconds (s), the speed is calculated in metres per second (m/s). If the distance is in miles and the time in hours (h), the speed is calculated in miles per hour (mph). Other units could be given, too. Just take care to convert appropriately and write the correct unit at the end.  Also pay attention to what units the question is asking you to use.

We can re-arrange the speed formula to calculate distance or time. So we have:

Below you can see a distance-time graph. Study the different parts of the graph carefully. 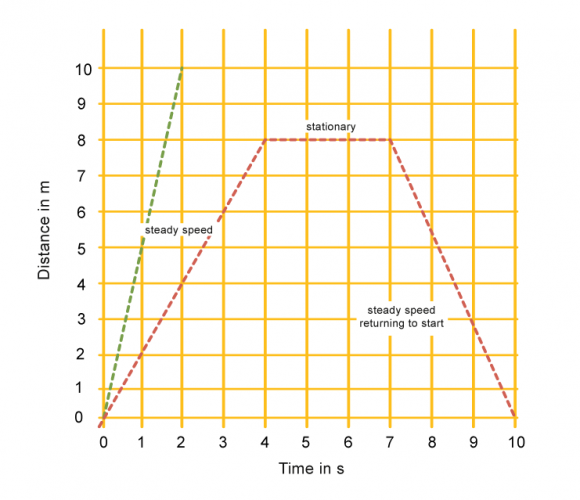 - A straight diagonal line means the object is moving at a constant speed.

- The steeper the line, the faster the speed.

- A flat line means the object is not moving.

- A downwards slope means the object is moving in the opposite direction.