In this worksheet, students will learn about relative motion and how trains and cars appear to be moving as they pass one another.

Imagine you are sitting by your window observing a car driving past your house. From your perspective, you are at rest and the car is moving. However, from the point of view of a passenger in the car, they are sat still and they would see you (along with your house and all the surroundings) as moving. You and the passenger have a different frame of reference.

Let's think of a different situation. An observer at a train station sees fast train zoom past them at a speed of 100 mph. If the observer could see inside the train, a cup of coffee in a passenger's hand would be seen as moving at the same speed as the train. On the other hand, a passenger sat on that train would perceive the same cup of coffee being at rest in their hand. 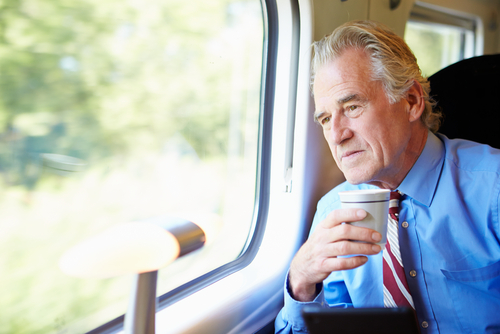 Imagine a ball was thrown on a moving train. The ball is thrown at 5m/s and the train is moving at 10m/s. As you are probably starting to work out, if you asked the question "how fast is the ball moving?", it depends on your frame of reference. Its speed would appear different to the people on the train, compared to someone looking at the train from the platform.

So if someone outside the train is watching the ball moving, they will see it moving at 15 m/s, which is the sum of the speed of the train and the speed of the ball (with respect to the train). In other words, when the frame of reference and the motion of the object are moving in the same direction, we add them to find the relative speed.

Now imagine the ball was thrown in the opposite direction. The observer on the platform would actually see the ball slowing down - and maybe even move to the opposite direction - depending on the speed of the train and the speed the ball was thrown at. This is because speed is not only a number, but a vector, called velocity. A vector is represented by an arrow, the length of which indicates the size of the speed, whereas the direction the arrow points towards indicates the direction of movement.

Let's keep the numbers the same:

We will now explore relative motion further through the questions that follow.