Reading Fiction: Owls in the Family

In this worksheet, students test their understanding of a passage from the book Owls in the Family by Farley Mowat.

Read this extract from Owls in the Family by Farley Mowat. Remember you can always look at the text by clicking on HELP. 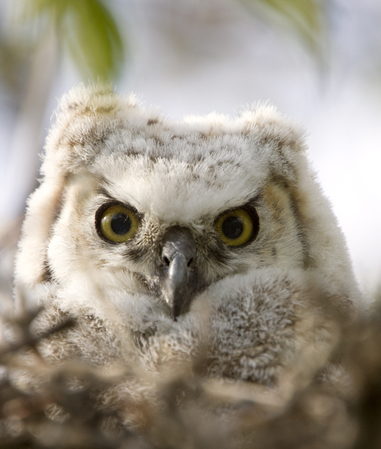 Bruce and Murray came over and we pulled the brush away. There was the missing owlet, the third one that had been in the nest, and he was still alive.

He was bigger than the other two, and that was probably because he was the first one hatched. Horned owls are funny that way. They begin to lay their eggs in March when it's still winter on the prairie. The eggs are laid a few days apart, but from the time the first one is laid, the mother has to start 'setting'. If she waited until she had a full clutch of eggs, the early ones would be chilled and would never hatch.

The one we found must have been the first to hatch because he was not only bigger than the others, but must have been a lot stronger too. When the nest blew apart, and he fell to the ground, he was able to wiggle under the brush pile for shelter, and that probably saved his life.

He was about as big as a chicken, and you could see his grown-up feathers pushing through the baby down. He even had the beginnings of the two 'horn' feathers growing on his head. A surprising thing about him was that he was almost pure white, with only small black markings on the ends of his feathers. When we found him he looked completely miserable, because all his down and feathers were stuck together in clumps, and he was shivering like a leaf.

I thought he would be too miserable to feel like fighting, but when I tried to pick him up he hunched forward, spread his wings, and hissed at me. It was a good try, but he was too weak to keep it up, and he fell right over on his face.

I was still a little bit afraid of him, because his claws were long and sharp, and his beak - which he kept snapping -seemed big enough to bite off my finger. But he did look so wet and sad that after a while I stopped being afraid. I got down on my knees in front of him and, very slowly, put my hand on his back. He hunched down as if he thought I was going to hurt him, but when I didn't hurt, he stopped hissing and lay still. He felt as cold as ice. I took off my shirt and put it over him, and then I picked him up as carefully as I could and carried him out of the bluff so he could sit in the sunshine and get dry and warm again.

It was surprising how fast he started to get better. In half an hour his feathers were dry and he was standing up and looking around him. Murray had brought along some roast-beef sandwiches for lunch. He took some meat out of the sandwiches and held it out to the owl.

The owl looked at him a minute, with its head on one side, then it gave a funny little hop and came close enough to snatch the meat out of Murray's fingers. It gave a couple of gulps, blinked its eyes once, and the meat was gone. He was certainly a hungry owl! When I found some dead mice that his mother must have left on the edge of the nest, and which had also been blown to the ground, the owl ate them too. They must have been hard to swallow, because he ate them whole. But he got them down somehow.

After that we were friends. When Bruce and I started to walk away from him, just to see what he would do, the owl followed right along behind us like a dog. He couldn't fly, of course; and he couldn't walk any too well either. He kind of jumped along, but he stayed right with us all the same. I think he knew he was an orphan, and that if he stayed with us we'd look after him.