In this worksheet, students read an extract from Tom Sawyer by Mark Twain and analyse the text through the questions that follow.

In this extract, Tom has been told to paint the fence as a punishment.

Ben Rogers hove in sight presently - the very boy, of all boys, whose ridicule he had been dreading. Ben's gait was the hop-skip-and-jump - proof enough that his heart was light and his anticipations high. He was eating an apple, and giving a long, melodious whoop, at intervals, followed by a deep-toned ding-dong-dong, ding-dong-dong, for he was personating a steamboat.

Tom went on whitewashing -- paid no attention to the steamboat. Ben stared a moment and then said: "Hi- yi ! You're up a stump, ain't you!"

No answer. Tom surveyed his last touch with the eye of an artist, and surveyed the result, as before. Ben ranged up alongside of him. Tom's mouth watered for the apple, but he stuck to his work. Ben said: "Hello, old chap, you got to work, hey?" ... 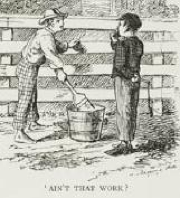 Tom contemplated the boy a bit, and said: "What do you call work?"

Tom resumed his whitewashing, and answered carelessly: "Well, maybe it is, and maybe it ain't. All I know, is, it suits Tom Sawyer."

The brush continued to move. "Like it? Well, I don't see why I oughtn't to like it. Does a boy get a chance to whitewash a fence every day?"

Tom gave up the brush with reluctance in his face, but alacrity in his heart.

...Tom said to himself that it was not such a hollow world, after all.

Now answer the following questions on the extract. If you need to read the extract again, you can look at it by clicking on the Help button.